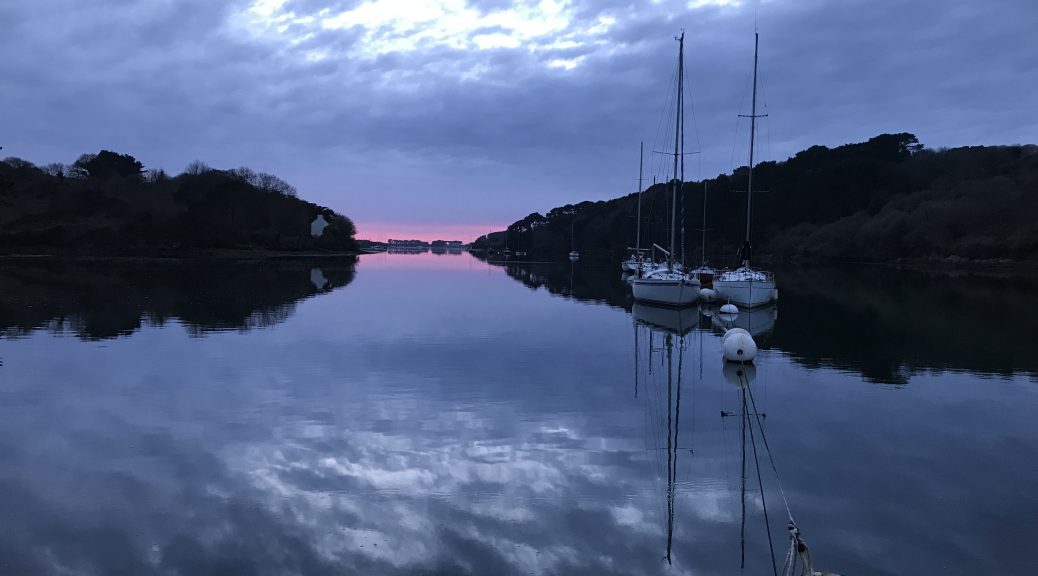 Finally conditions started to improve and we jumped at the chance to sail West in choppy seas with close hauled sails and made our way towards L’Aber Vrac’h on the North West of France. Like many harbours from out at sea on first appearances it is disorientating to find that it doesn’t actually look like there is an entrance there and with the abundance of rocks pertruding and waves crashing over them you question yourself that a mistake hasn’t been made. Our pilot book describes it as looking like an ‘unlikely haven from offshore and there seems no way in through the rocky chaos until you spot the Liberter buoy with its doleful whistle.” Of course with the accuracy of modern day charts and GPS you can be pretty sure that there is an entrance. However, we all contemplated that this was the place during the Second World war where the Navy worked with French resistance to repatriate airmen shot down. The motor gun boats would creep in during a moonless night having crossed 100 miles from Uk with no instruments and find this rocky, wave ravaged, highly tidal little bay on the darkest of nights before picking up their clandestine cargo and creeping back out again before the first light of day.

One thing which is retained from the past is the tradition of seaweed harvesting. Every now and then the ‘Geomoniers’ as they are known, glided past in a flat bottomed boat with a small crane attached piled high with this slimy iodine rich crop. In the past and the present day they were used as fertilisers and spread on fields but today there are also more sophisticated uses in the pharmaceutical industry for cosmetics and as natural ingredients in herbal remedies.

This is now true oyster bed territory and with the huge tidal range of 9m these are totally obscured when the tide is up. However, when the sea goes down this intriguing sight of row upon row of metal mesh bags slowly appears suspended on racks above the mud containing the precious shells. They start as larvae floating around in the sea and then attach themselves to terracotta tiles, the ‘ostreiculteur’ then scrapes them off and puts them into the mesh pillows. They are pollution sensitive and will only grow in relatively clean water taking about two to three years to grow before being consumed. We were to go on to find some wild ones and other times we sampled cultivated ones. Cooked and sizzling they are delicious shallots, garlic, butter, breadcrumbs and parmesan and parsley. 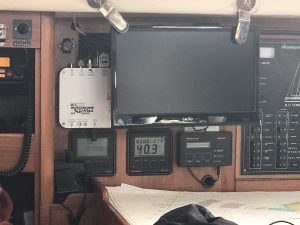 We were waiting for conditions to calm before rounding the Western most part of France and tackling the Chenal Du Fort. However, fustratingly our progress was once more hampered by more bad weather and strong winds predicted so the decision was made to move up  river to a sheltered anchorage with big banks and trees all around. Boat work, artwork and general area exploration was made appreciating the calm, the birdsong and gentle lapping of water against the hull of being upriver. The other discovery from here was ‘les crepes’! On the way back from a walk we stopped in at a little place, I have always thought that pancakes are pancakes but this was quite something else and as it was to turn out in subsequent weeks of travel through Brittany, utterly irresistible! They are large, thin, have a lace like crispy exterior, a light vanilla flavour and a lot of butter. These can be eaten any time of the day, so there is little way to resist the temptation.