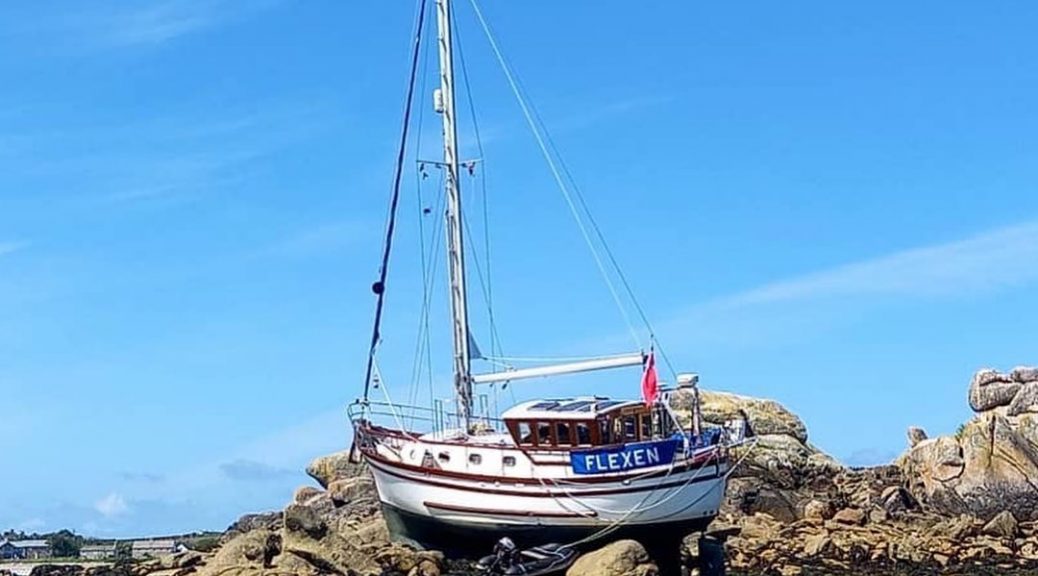 So what happened on Monday night…?

We had been watching the forecast carefully for the days before and a large low pressure was coming in from the West likely to bring strong winds. There was quite a lot of movement of boats some diving back to the mainland for cover others carefully assessing their options, changing anchorages and positions. The Scillys are low lying and offer good anchorages from one or two directions of wind but there are few options which offer protection from the wind which comes from all directs. We opted for a quiet place, Great Bay on St Martin’s, nice sandy bottom, beautiful spot but exposed, maybe very exposed to the North. The eye of the storm was likely to go straight over the top of us and due to this the forecast kept changing slightly but making a big effect on what to expect. 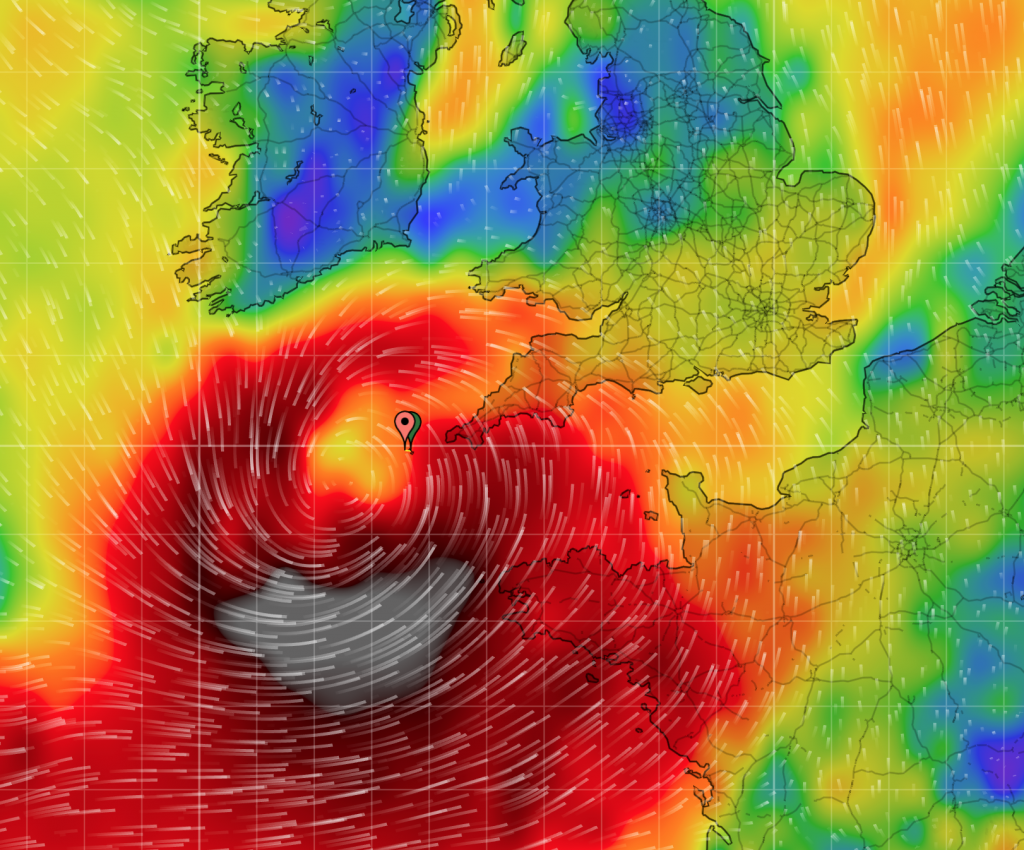 Monday afternoon started with a gradual but increasing wind strength to a strong and sustained wind of about 30knots or so, pelting rain by early evening a little swell got up but we and the other two boats rode it out without any issues. By 8pm it had calmed and there was a sudden lull a lightening in the skies and the rain stopped. Now the next part was going to be more difficult to predict and would be coming in the early hours. We relocated to a different part of the bay in between two boats and close to rocks but with the wind due to do a full 180 degree shift the idea would be that we would be blown off them… Shouting to the lightweight racing boat anchored next door both boats agreed the first part hadn’t been too bad after all. 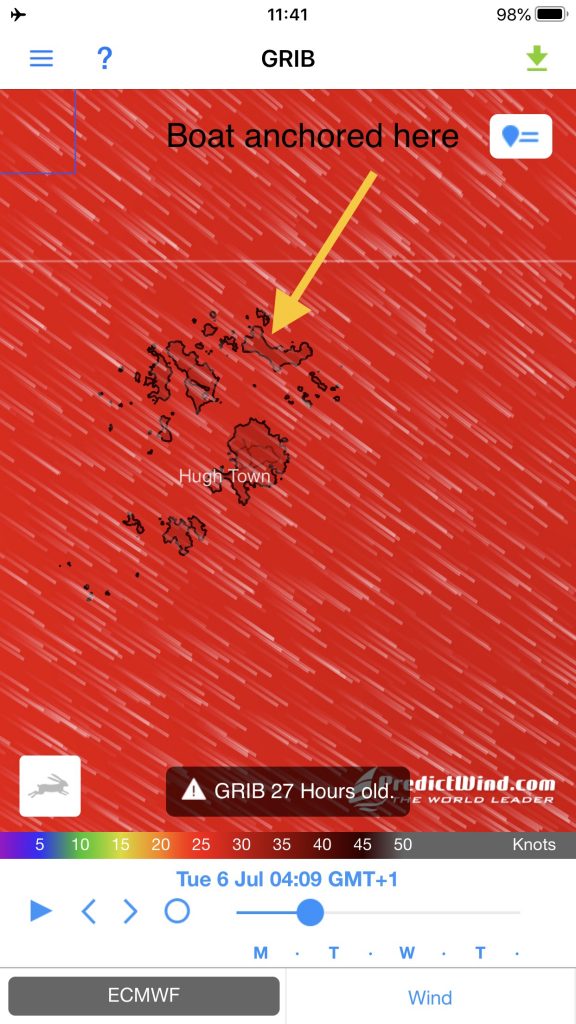 I happily went to sleep with Tim opting to stay up on watch, gently rocked to sleep by a little swell. During the night there was a sudden commotion and I was awake in a moment to. “Get up the boat next to us is dragging fast and might be about to go in us” I was on deck and kitted up in about 30 seconds! The world outside had dramatically changed, it was very dark and forbodding, the boat adjascent was careering out of control up and down from the chop and swell and the roar of the wind was so loud whistling past, we had to shout to each other in the cockpit.  Panicked voices came through the wind as they wrestled to get the anchor up, nearby rocks must of been looming out of the darkness by this point. They careered from one side to the other and we watched on to see what was going to onfold. Fenders had already been prepared for the eventuality of them hitting. At this point channel 16 came alive with reports to the coastguard along the lines of “We are on the rocks and require immediate assistance” Another French boat trying to make themselves understood that they also had been blown aground “what lifesaving equipment do you have onboard?”came the reply from the coastguard? Then a single handed friend’s boat came onto the channel and we feared the worse…

Monitoring the situation outside the boat next to us still thrashing and careering around. We seemed to be holding and though the chop and general swell was getting up a little the wind was staying at about 40knots down from when it had apparently suddenly torn through the anchorage from little wind to about 50knots in the opposite direction to what it had been. The swell increased a little as the early hours wore on but I think many of the boats where relieved to see the first silver glimmers of morning light at about 4am.

The next day reflecting on how events had unfolded it was good we had an early hours watch on.

We had potentially anchored a little too close to a light boat that was likely to come unstuck and in other anchorages this was a very real issue with a favourite anchorage ‘St Helen’s pool’, where all but one boat apparently dragged their anchors that night! They had been left with motoring in the pitch darkness. Many had heavy kelp attached which had meant the windless had failed and they had been unable to reset the anchors. The boat that ended up amongst the rocks had all crew rescued by the lifeboat and taken ashore, they came back the next day and the boat was refloated apparently undamaged with an ingenious rope haul set up by the Jake skipper on Mananan at low tide. 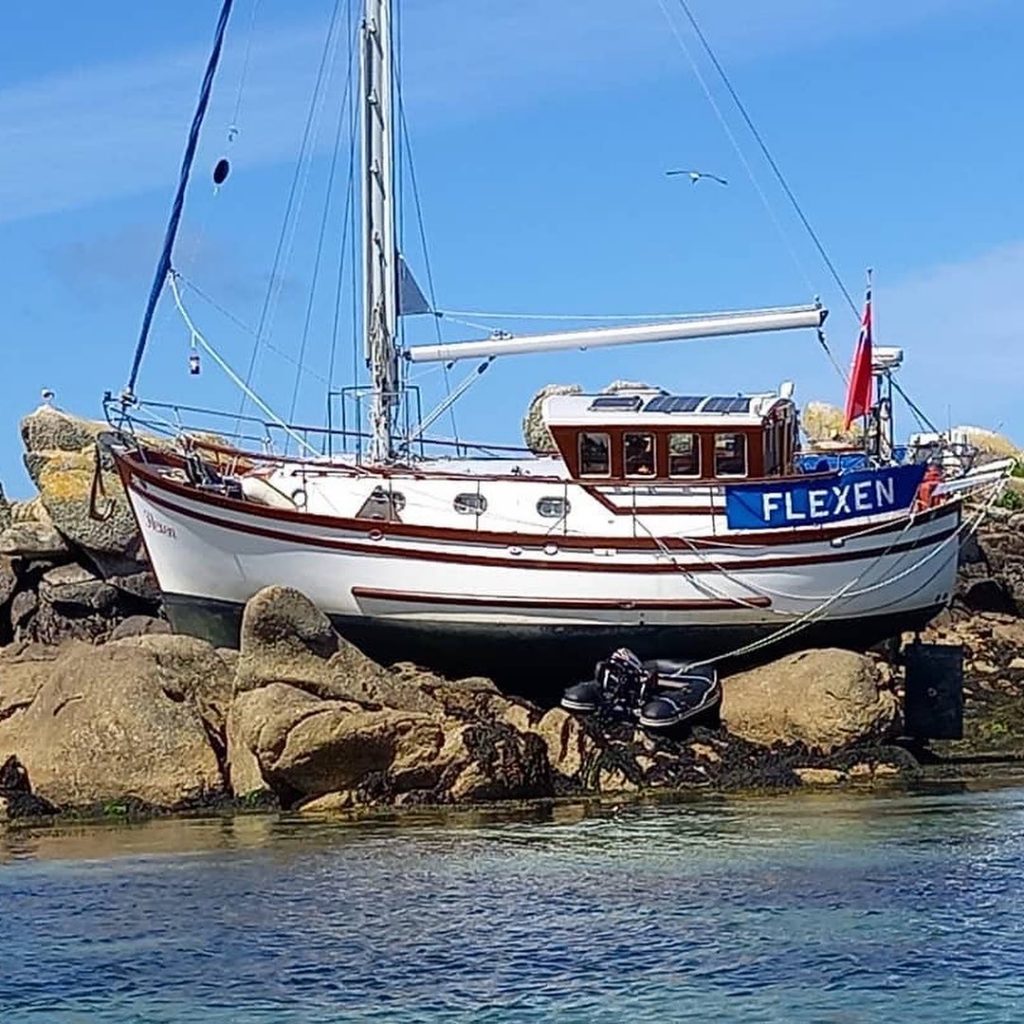 The change of anchorage worked, we were near some shelter from the land but the key was not to be near any boats so we would probably have also been ok in a slightly more open part of the bay just nearby. 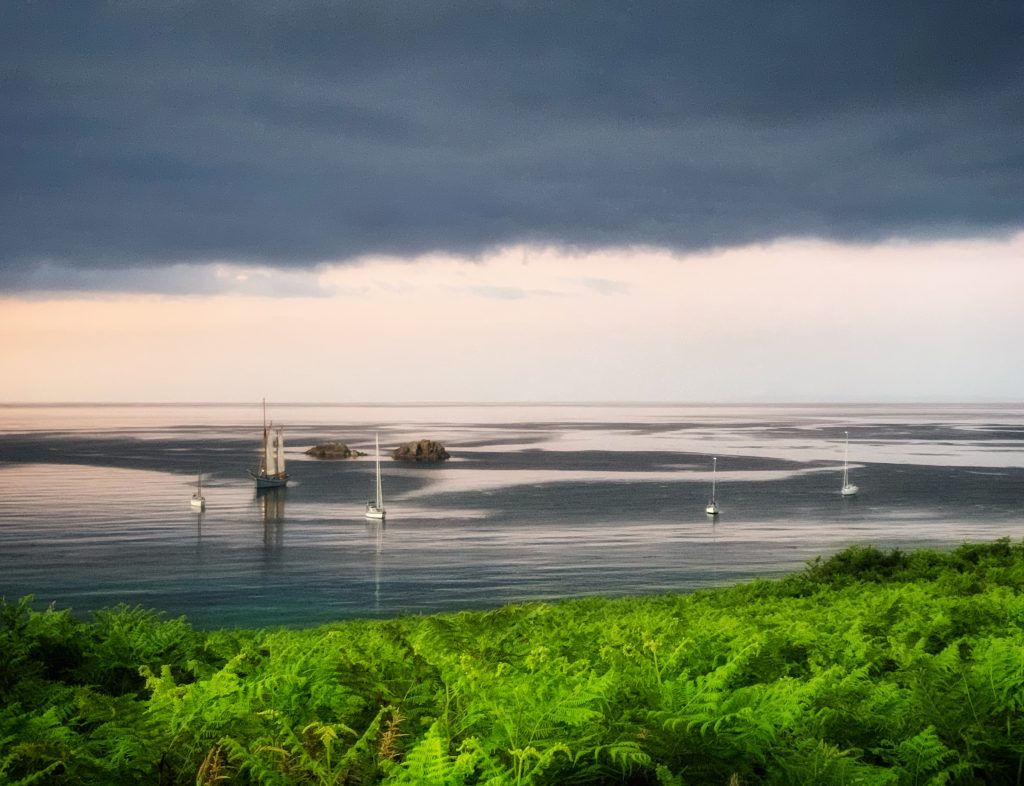 2 thoughts on “A Storm in Paradise”