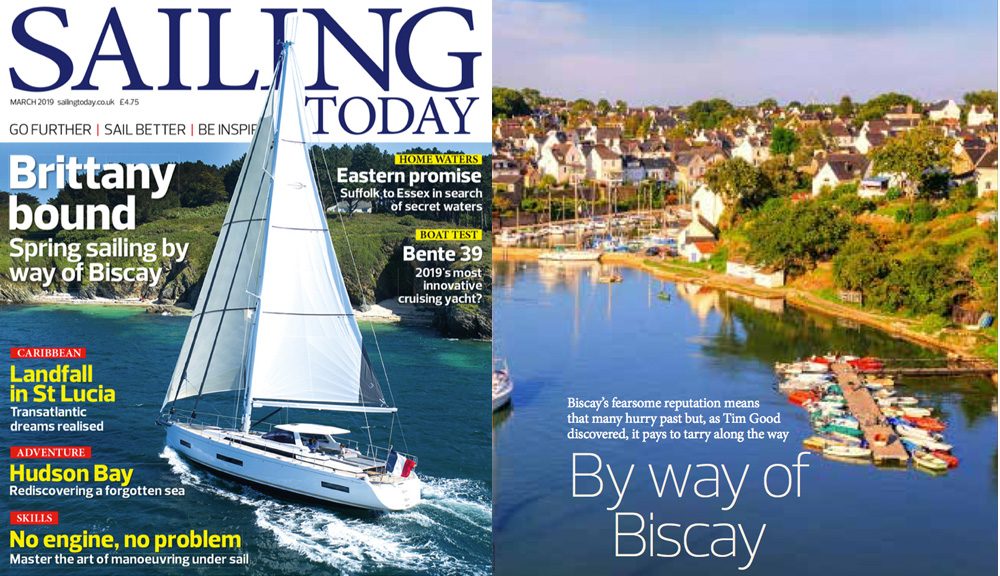 Since Noway we have sailed down Brittany, crossed to Northern Spain and then Galicia. This piece in Sailing Day, March 2019, gives you a little snapshot! 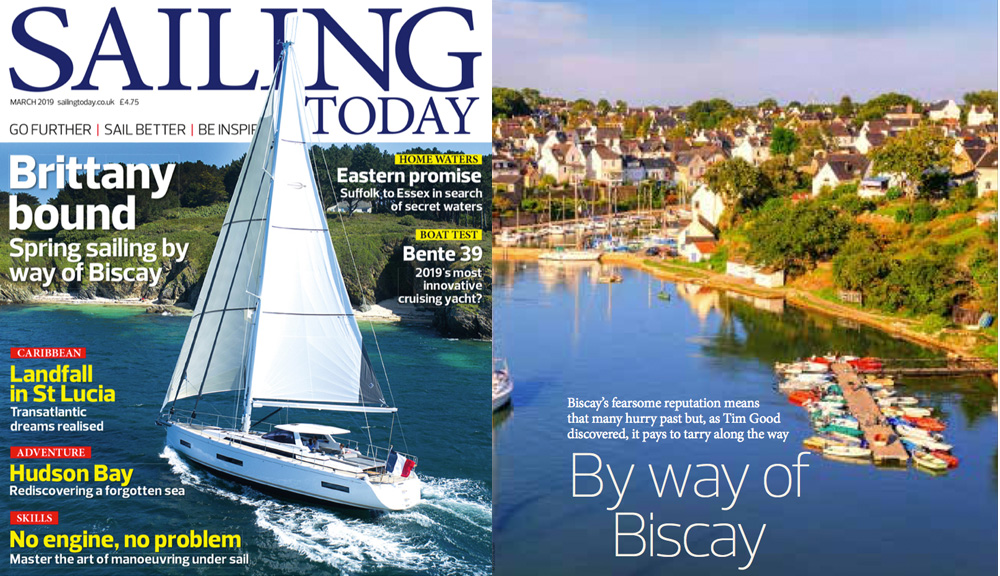 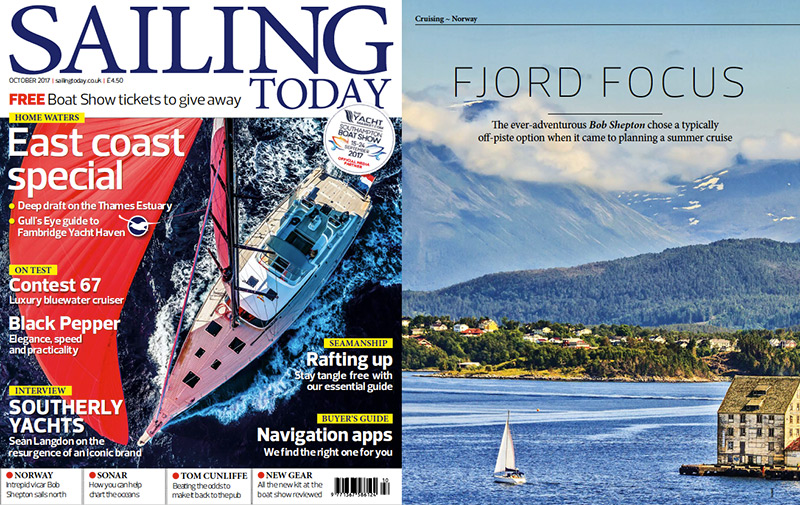 This article was written by the intrepid reverend Bob Shepton on our passage to Norway in search of remote and pristine snow capped peaks falling straight into the sea. It was first published in Sailing Today, October 2017.

Click on spread below to read the full article:

My trip from Inverness to Norway came about almost by accident. Initially, I was hoping to fl y out to Gåssten, a converted Swedish minesweeper, for some ski touring in Norway with Fjord Adventures. At the same time I received an email:

‘We are on the way north to the west coast of Scotland, do you know where there are any moorings we could pick up?’

Obviously a man after my own heart not wanting to pay marina or mooring fees. We duly met up in Oban where Tim had moored Shadowfax, of Lord of the Rings fame but this was a boat, by the Oban Sailing Club, which I had not recommended as you are duty bound to give a donation for picking up one of their moorings. During a pleasant chat over coffee, Tim suggested

“you want to get to Norway and we do not have offshore experience, why not hitch a lift across with us via Shetland.”

So I did. Having given them a hand the next day up Neptune’s Staircase, the locks at the start of the Caledonian Canal, I joined them a few days later in Inverness. Next morning at 0900hrs we locked out of the Caledonian Canal. Chris, described by Tim as being as strong as an ox, and he certainly kindly did more than his required share of the watches, arrived by plane at this point as we were waiting to take the final sea lock out into the Moray Firth.

We then soon came up to the long Kessock road bridge across from Inverness to the Black Isle before getting out properly to sea. As I approach bridges like this there is nearly always an optical illusion and I wonder whether it’s high enough and whether we will pass safely underneath. It brought back memories of passing under various bridges in years past – the road bridge across to Manhattan after the Statue of Liberty coming up the Hudson River to New York, by contrast the much lower bridge in the Faroes, with us fortunately stemming the tide slightly for a controlled approach, to get up the long channel splitting the islands, and of course in Holland, though one in particular stands out here as we did bend our VHF aerial under it owing to a slight error of judgement.

Once through I embarrassingly suggested that “technically perhaps we should be passing the other side of that buoy?”, conscious that the buoyage runs clockwise around the British Isles, but of course the channel turns southwards here, counter-clockwise, to go up channel to Inverness so I was firmly put in my place. Now as a lowly crew member who prefers to sleep half sitting up I was assigned the only possible bunk to fit such criteria, in the forepeak which is usually not the most comfortable berth on a boat, especially as it turned out when passing the eastern entrance to the Pentland Firth with its fearfully strong tides. The boat rolled strongly from side to side, presumably affected by the strong pull of the tide, and it was necessary to jam my arms hard down either side of my body within the slot made by the cockpit seat cushions already jammed in place to make a good sea berth, to prevent rolling violently, myself, from side to side when trying to sleep. But we had a pleasant sail up to the Shetlands though with variable wind, and to the owner’s chagrin requiring quite a bit of motoring as well.

First Fair Isle loomed out of the mist to port and then on a pleasant evening we came up to Sumburgh Head. On the chart were the words ‘Area To Be Avoided’ just to the east of the headland, but when we phoned the Coastguard to check about this we got the impression they did not really know why it said that either but advised ‘Exercise care at that point’! So we proceeded on to Lerwick and into the south harbour to moor up against the quayside, being careful to lay a spring so that we would not be pushed into a large catamaran immediately forward of our bows. It was interesting that after the catamaran had left the next day all the other boats there were Norwegian. There was a suspicion in the air that the fact that the booze is much cheaper in the Shetland Islands than in Norway could be part of the motive for their visit, especially as the first thing the big catamaran had said to us the night before as we tied up after a two day passage was,

Lerwick, originally known as Leirvik meaning Muddy Bay – I imagine some Viking Chief had jumped down from his boat and got his feet dirty – also had all that we needed by way of supermarkets to renew stores. We also took the opportunity to hire a car and have a look around the main island of Shetland doing the tourist thing of visiting the Sumburgh lighthouse and noticing how the trees were bent over double because of the strong winds. Now Emmie, the lady of the boat, was no mean artist, specialising in painting old buildings in acrylics with her paintings exhibited in galleries in UK and America. It was a pity therefore that we did not have more time to spend in the Shetlands as there were numerous old buildings and ruins of characteristic dry stone wall construction and she could have had a field day there.

One evening there was the intriguingly unique experience of eating in the Gurkha Kitchen, a restaurant run by a Gurkha family who had settled in Lerwick. By contrast the forecabin had now become the Chinese Torture Chamber, as with the north wind blowing us away from the dockside the bow mooring line kept squeaking and squealing as it see-sawed through the fairlead at irregular intervals depending on the gusts. You waited, tensed up, for the next squeal just above your head, reputedly reminiscent of the water drip on your head in the Chinese Torture of olden days. In the end I abandoned the forepeak and moved my bedding to the saloon amidships to get some sleep, being careful to cover the new material on the seat cushions first of course on this smart boat!

After three days of waiting for a weather window, a favourable forecast arrived on the owner’s smartphone and it was time to go. As we motored out in the evening light it appeared they had got the buoyage wrong again, as we were going north up the channel coming south into Lerwick and the buoyage was red to port and green to starboard. But in fact this was not so much a channel into Lerwick but a way through from south to north with Lerwick a possible stopping off point on the way and so the clockwise rule still applied. All very confusing; ocean sailing is much easier! A ship with a huge bridge-like construction and small deck site aft made its way out to sea before us to port, presumably something to do with the oil industry.

At this stage we were in some 30 knots of wind but this was due to moderate, and as it was from the northwest, we were shielded by the Shetlands from big seas and swells, and anyhow this Seastream 43 with its 17 tonne displacement was much bigger and more stable than my 33 foot Westerly. The wind duly moderated overnight and we again enjoyed a variable but pleasant sail across towards Norway. There was a slight anomaly in the forecast with a southerly wind promised which never arrived but one night watch approaching the coast of Norway was especially memorable. 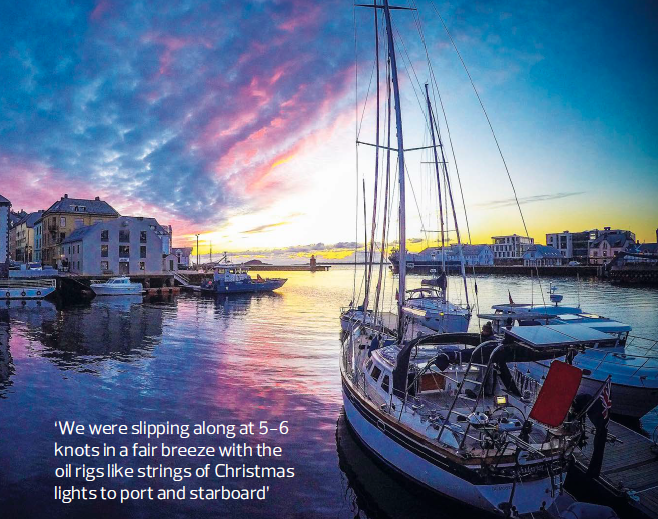 We were slipping along at 5-6 knots in a fair breeze with the oil rigs like strings of Christmas lights to port and starboard, sea state slight, not a cloud in the night sky and a nearly full moon shining benignly down to give us light. I was reminded of trying years ago on my very first Atlantic crossing when ocean navigation was all by astro to shoot the moon off the coast of Newfoundland, to cross it with a position line from a previous sun shot to obtain our present position. But the moon moves very fast and my maths was always weak and it was hopeless. Luckily we came up to Cape Race at the southern tip of Newfoundland next day in daylight, and certainly the sea and spray were racing past it at the time. So we made it, Portland UK to Portland USA (Maine) without mishap, and all the way back as well in spite of my having to hang onto a shroud with one hand and shoot the sun with the other in stormy winds on the nose all the way from half way across the Atlantic to the chops of the Channel.

More motoring in the morning against the north wind which was meant to be southerly to close the lovely Norwegian coast and to make our way northwards towards Ålesund.

That evening we put into a small enclosed harbour by a cluster of houses on one of the first islands we came to as we moved inland. We were greeted and welcomed to Norway by a couple on their motor boats who took our lines and helped us tie up alongside. The whole scene and situation was so typical of this brilliant country, people and coastline.

The next morning we made our way in sunshine to Ålesund, where I jumped ship onto Gåssten by previous arrangement. And what a way to go ski touring in Norway, being transported up and down the fjords in a well appointed, comfortable ship, looked after by Sven the skipper, Tash and Annie, I felt like royalty, and with a group of marvelously mad Italian girls as fellow ski tourers, and one or two slightly older British gentlemen to leaven the lump.

On the other hand I did discover that I was older than I thought I was and might have to revise my plans for ski touring in South Georgia in the Antarctic spring. But that’s another story… 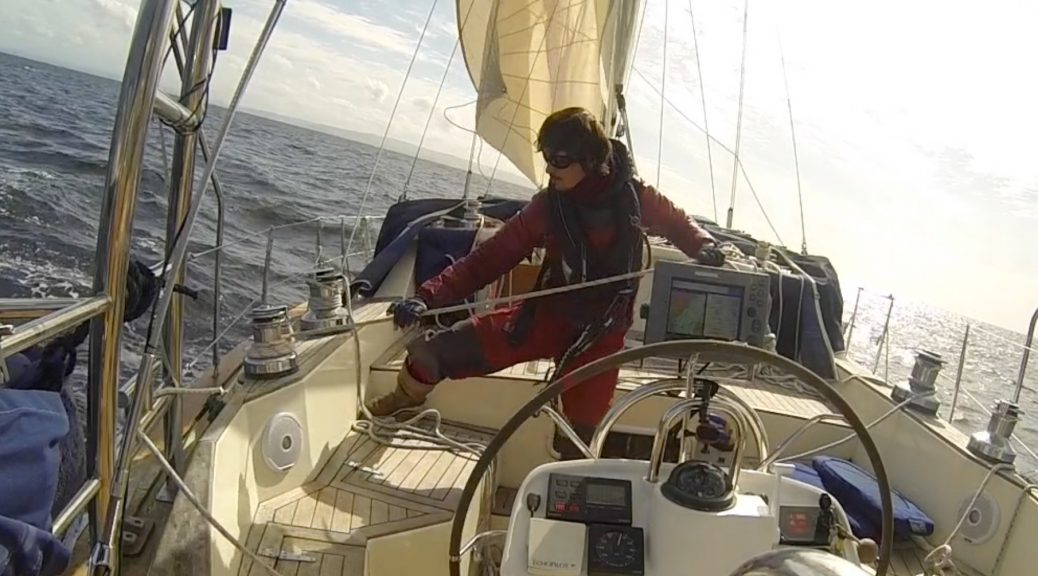 The boat is fairly well adapted for single handed sailing and almost everything can be done from the comfort of the cockpit. Here is a quick movie showing how Tim tacks the boat solo style…